Odia jawan Pradeep Kumar Panda was among the two slain CRPF jawans who were awarded with Kirti Chakra, the second highest peacetime gallantry medal of the country, and their commander was awarded the Shaurya Chakra for displaying dare devilry in taking on heavily armed terrorists in Jammu and Kashmir’s Awantipora in 2017.

The Kirti Chakra is an Indian military decoration awarded for valour, courageous action or self-sacrifice away from the field of battle. It may be awarded to civilians as well as military personnel, including posthumous awards. It is the peacetime equivalent of the Maha Vir Chakra. It is second in order of precedence of peacetime gallantry awards; it comes after Ashoka Chakra and before Shaurya Chakra. Before 1967, the award was known as the Ashoka Chakra, Class II.

This CRPF jawan, a native of Rajgangpur in Sundargarh district, was martyred while fighting heavily armed terrorists in Jammu and Kashmir’s Pulwama in 2017. Panda was working with the 132 battalion of CRPF and had joined the paramilitary force in 2006.

The militants had stormed CRPF training centre at Pulwama, Jammu and Kashmir, on December 30, 2017. Constables Panda and Rajendra Kumar Nain and their commander Assistant Commandant Zile Singh, who has been awarded the Shaurya Chakra, displayed exemplary bravery in thwarting the deadly fidayeen attack that went on for over 36 hours, an official citation said.

He was awarded with a police medal for gallantry on Independence Day in 2016 for his gallant endeavours. In August 2016, Panda had taken on armed terrorists during an attack on Nowhatta Chowk Centre during Independence Day celebrations. According to senior CRPF officers, he kept firing at the terrorists even when his commandant Pramod Kumar was shot through the skull. 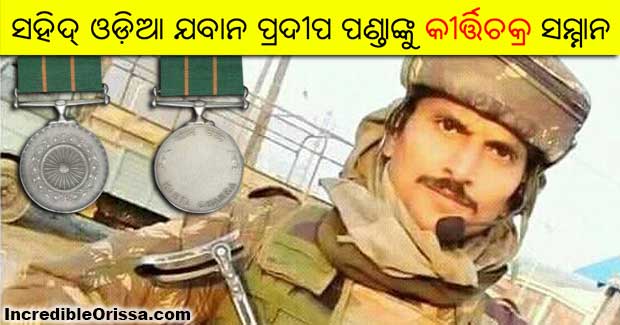