Since Sura Baba is the talk of Odisha now – KBC show of Tarang Music decided to bring in some timely entertainment with this hilarious comedy video.

In this episode, paan chewing Pragnya dressed in a saffron robe answered all questions. 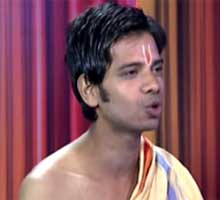 Hundreds of women devotees coming from distant places would wait in serpentine queues early in the morning vying to lap up Sura Baba’s spit collected in a spittoon in front of his house.