Odisha girl Pragya Patra has made it to the Live round of singing reality show ‘The Voice India’ aired on &TV (AndTV) channel.

She first cleared Blind Auditions round of the show by singing ‘Main Tenu Samjhawan Ki’ song. Pragya was so impressive while singing the song that both Sunidhi Chauhan and Mika Singh wanted her in their respective teams. Pragya chose to be in the team of Sunidhi Chauhan.

On Saturday, she won the tough Battle Round while lending her voice to the song ‘Mohe Panghat Pe Nandlal’ of movie Mughal-E-Azam, beating another contestant Garima Khiste from Baroda.

Pragya Patra who hails from Odisha but presently resides in New Delhi, had left her handsomely paid digital marketing job with Google in order to make a career in singing.

She was 4-5 years old when she stared singing. Her mom who is an All India Radio (AIR) singer, was the one who discovered her talent. Pragya was working in Bangalore at HUL as an IT associate and it was over there when she won voice of Bangalore. She has sung with Shankar and Siddharth Mahadevan. 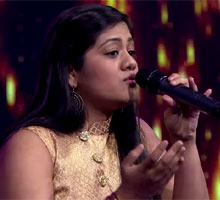 She also finished in top 30 of Indian Idol 2012. Pragya Patra performed with Mika for Idea rocks India. She worked as a guest singer on Radio CIty Super singer.

The Voice India is the ultimate singing talent hunt India’s ever witnessed. The Voice India is looking for nation’s mega star with the ability to perform and entertain with their unique voice. The absolute key factor which will be your prima facie will solely be your voice.

Best of luck to Odia girl Pragya Patra for next round!