Pratap Chandra Sarangi drew the maximum cheers from the crowd when he stood up to take the pledge as Minister of State at the oath-taking ceremony of Prime Minister Narendra Modi’s new government on Thursday.

Dharmendra Pradhan will have an expanded role in the new Modi government with the former Petroleum and Natural Gas Minister retaining this key Ministry while given additional charge of the Steel Ministry.

Pratap Chandra Sarangi became an instant hit on social media after images of him packing bags for New Delhi for the swearing-in ceremony after winning the parliamentary elections from the Balasore Lok Sabha constituency. He is known as Odisha’s Modi for his simplicity.

Sarangi defeated Biju Janata Dal’s Rabindra Jena, who was a former Member of Parliament and businessman, by more than 12,000 votes.

Pratap Chandra Sarangi serves as a National Executive member of the Bharatiya Janata Party (BJP). He had been elected as Member of the Odisha Legislative Assembly, two times: from 2004 to 2009 and from 2009 to 2014, both times from Nilagiri constituency. He also contested in the 2014 Indian general election from Balasore, Lok Sabha constituency as a BJP candidate, which he lost. 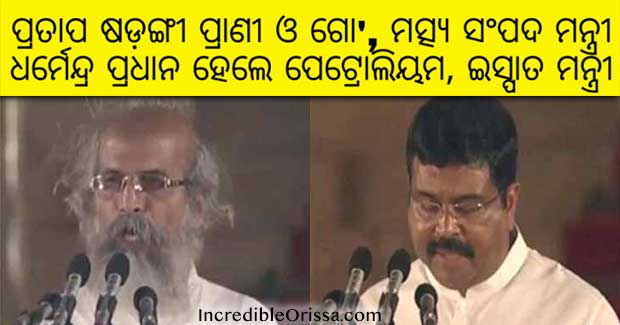