Pratyasha won the first medal in the 50m event by clocking 32.87 seconds and bagged the second spot in the 100m with a timing of 1 minute and 10 seconds. She won the final medal in the 200m event and all of them were in the backstroke category.

She got a warm welcome after her arrival at the Biju Patnaik International Airport (BPIA) from Bengaluru.

This is Odisha’s best-ever performance at the national level in swimming.

Almost 900 swimmers from 28 different states participated in the national meet, as the Basavanagudi Aquatic Centre in Bangalore bustled with a crowd of around 2500 spectators.

Standard-IX student of BJEM School in Bhubaneswar, Pratyasha has the chances to win more medals for her state as she is set to compete in three more events (200m backstroke, 50m and 100m butterfly) of the ongoing National championship.

Pratyasha Ray took to organised swimming at the age of two years at Dr Jhasa Ketan Sahu Swimming Complex in Sambalpur, under the tutelage of Rankanidhi Seth. But since 2011, she has been honing her skills at Biju Patnaik Swimming Complex, Bhubaneswar, under the guidance of senior coach Surendra Naik. Earlier this year, she received coaching from Tapan Panigrahi at Pune. 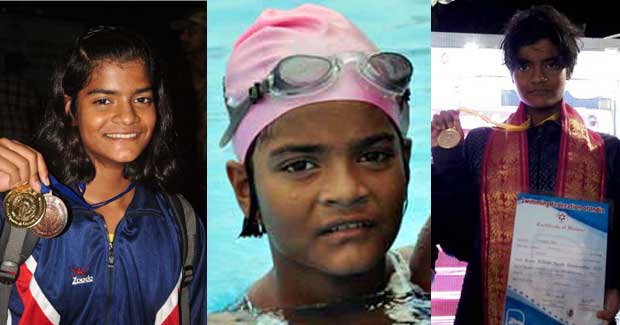