Odisha’s swimming sensation Pratyasha Ray made history by winning 4 gold medals and 1 silver in the Under-15 girls events at the South Asian Aquatic Championships (SAAC) in Colombo, Sri Lanka.

Now she became the first ever Odia swimmer to win an international swimming event.

Pratyasha bagged gold medal in the Under-15 girls 100 metre backstroke by clocking 1:10;91. While Bisma Khan of Pakistan and Shenali Weerawansa of Sri Lanka got the silver and bronze medal with a timing of 1:10;93 and 1:14.74 respectively in the concluding day on Saturday.

Pratyasha got gold medal in the U-15 girls 200 metre backstroke event clocking 2:33.29 seconds. The silver and bronze medals claimed by Bisma Khan of Pakistan and Shenali Waeerawansa of Srilanka.

Pratyasha Ray bagged silver medal in the 50 metre Under-15 backstroke event with a timing of 32.82 seconds. While Bisam Khan of Pakistan and Shenali Weerawansa of the host Srilanka received the gold and bronze medal by clocking 32.19 and 33.47 seconds respectively.

The event was held at the Sugathadasa Swimming Pool Complex in Colombo. Hosted by the Sri Lanka Aquatic Sports Union (SLASU), the event continued from October 18 to 23.

Earlier this year, she became the first Odia swimmer to have won a medal at national level.

She had bagged three gold medals in 50m, 100m and 200m backstroke categories in the junior girls (13-14 years) events at the 43rd National Aquatic Championship held at Basavangudi Aquatic Centre in Bangalore in July. 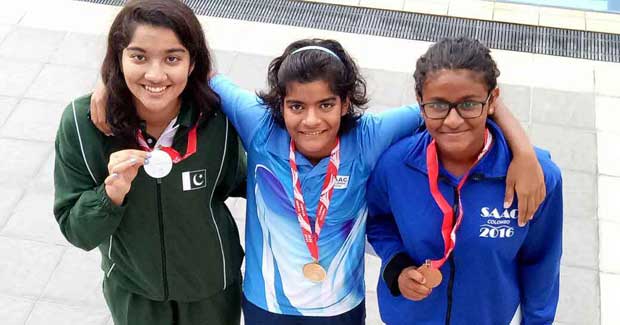