He was arrested for his involvement with the AT group, a major player in the chit fund scam, and had been in jail until he received conditional bail from the Odisha High court on March 3.

Now suspended BJD MLA Pravat Tripathy was back in Odisha assembly and attended the second phase of the budget session. 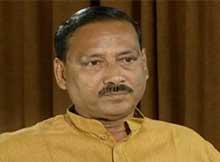 “Even though I am a suspended member, as a MLA, I adhere to BJD ideologically. I have been doing politics since my student days and have followed the ideals of Biju Patnaik,” Pravat Tripathy said.