President Ram Nath Kovind is coming to Odisha on a two-day visit beginning March 17. The State Government has started preparation for the visit of the President to the State next week.

On the first day, Kovind will dedicate Anand Bhawan Museum and Learning Centre at Tulsipur in Cuttack to the people of Odisha. On the same day he is scheduled to grace the foundation day celebration of National Law University, Cuttack.

Although the detailed programmes of the visit are still awaited from Rashtrapati Bhawan, it is learnt that the President will inaugurate the centenary celebration of Rastriya Sanskirt Sansthan at Puri on March 18.

Chief Secretary AP Padhi reviewed the preparation at a high-level meeting here on Thursday. Issues relating to aircraft, guard of honour, security arrangements, accommodation, carcade and transport arrangements, medical and health care for the VVIP, uninterrupted power supply, barricading, construction of dais were discussed in the meeting. The Chief Secretary directed departments concerned to complete their task well before the arrival of the President.

During his recent visit to New Delhi, Patnaik met the President and requested him to dedicate the Anand Bhawan Museum and Learning Centre to the people. Anand Bhavan, the ancestral house of former chief minister Biju Patnaik, was handed over to the State Government in 2015 by his two sons – Naveen and Prem Patnaik for converting it into a memorial museum.

ALSO READ: Odisha to include sports as compulsory subject in school curriculum 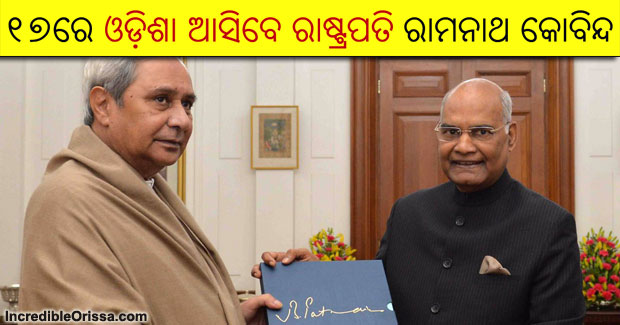