A proposal to connect Puri with Konark by rail link has been made to the Centre. BJD MP Pinaki Mishra, in a letter to Union railways minister Piyush Goyal, requested to consider connecting Bhubaneswar and Puri by rail link with Konark and Satapada.

Earlier Odisha Chief Minister Naveen Patnaik proposed the Centre to share half of the project cost of the new railway line from Puri to Konark. He urged the Centre to allocate necessary funds in the coming railway budget for the purpose.

Naveen said the new rail line will boost tourism potential in the golden triangle circuit and local economy of the heritage city. It will be an extremely profitable venture for Railways. He urged upon railway minister Suresh Prabhu for early sanction of this project and signing a memorandum of understanding (MOU) for timely completion of the project.

“It is a nice plan of the government to link these important tourist destinations with rail network. It will not only give a tremendous experience to the visitors, but also saves a lot of time that goes waste during the travel via roads. The Centre should consider the project since Puri and Konark are major tourist destination of the world,” said Ratikant Acharya, a retired government employee.

The BJD MP, who is also the chairman of the parliamentary standing committee on urban development, also urged the Union minister to develop Puri railway station with world-class infrastructure. “I earnestly urge you to sanction special funds for renovation and upgradation of Puri railway station to a world-class standard in the upcoming railway budget,” wrote the MP. 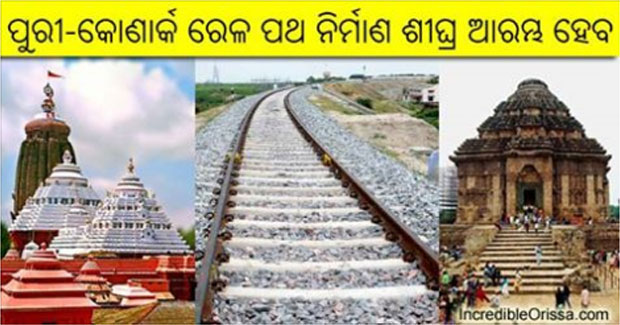