Servitors of the Jagannath temple and their family members to have a glimpse of the newly-carved idols of the Trinity on ‘Nabajouban Darshan’ on July 17.

The Shree Jagannath Temple Administration (SJTA) on Tuesday decided not to allow devotees from having any such darshan.

Earlier, the SJTA had announced that ‘Nabajouban Darshan’ would not be allowed for public in order to avoid rush inside the Jagannath temple, which is annually held a day before the Rath Yatra. A section of priests threatened to boycott Rath Yatra if the administration does not revoke the order.

Subsequently, a PIL was filed in Orissa High Court by a social activist from Cuttack against the SJTA decision. The court had sought reports from the temple administration. The matter is likely to come up for hearing in court on Wednesday.

Amid the controversy, law minister Arun Sahu discussed the issue with SJTA’s chief administrator Suresh Mohapatra. Sahu refused to comment as to why the temple body decided to allow the priests and their families. 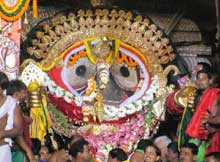 “While the matter is still pending in court, the temple administration has no right to take such a decision in favour of priests,” said Priyadarshan Pattnaik, convener of Sachetan Nagarika Mancha, a socio-cultural outfit.