Pyarimohan Mohapatra, whose residence was searched by CBI on Tuesday in connection with the chit fund scam, said some people have launched a campaign against him and the searches will help in bringing out the truth. 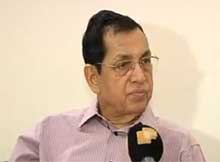 Claiming that he had no link with any ponzy scheme companies, Mohapatra said he would like to cooperate with CBI to unearth the truth and was ready to cooperate with the investigating agency probing the scam as per the Supreme Court direction.