While the BJP has announced a list of 40 star campaigners for Odisha for the two phase Assembly and Lok Sabha polls in state next month, the Congress leaders and supporters are expected to get recharged with AICC vice president Rahul Gandhi’s proposed tour to Odisha on March 31.

He would address two public meetings at Umarkote and another place in Koraput district to be decided later by the PCC president in consultation with others, Nabarangpur MP Pradeep Majhi revealed after meeting the Gandhi family scion here today. 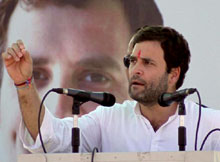