You will get to see the dance steps and location (Ramoji Film City) where this song is picturised on main lead – Amlan Dash and Riya Dey. 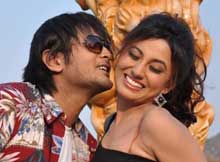 3 Comments
Improve your male potency and fight back the premature ejaculation. With the help of tadalis-reviews.com you will have your healthy sexual life back in no time. Order it with Priligy online and forget about premature ejaculation once and for all.
Copyright © 2020 Incredible Orissa.
error: Content is protected !!