Ama Rasagola, a new Odia song on Odisha’s favourite sweet’s historical existence and popularity, was released at Bhanja Kala Mandap in Bhubaneswar as singer Susmita Das rediscovered Odisha’s own Rasagola with her rendition.

Rasagola is satirical assertion of Odia pride and sets the context of the delectable sweet’s legacy in Odisha. The musical and its audio-visual have been performed by singer Susmita Das who is known for her works on Odia culture and literature.

Noted Odia lyricist Devdas Chottray has scripted the lyrics and music composed by Bibhuti Bhusan Gadnayak. It has been imaginatively visualized by Biyotprojna Tripathy.

The music launch of ‘Ama Rasagola’ marked Niladri Bije of Lord Jagannath offering Rasagola to Goddess Laxmi on returning to their abode after the nine-day stay at Gundicha Temple, in an attempt to pacify her.

The evening opened with a panel discussion on fight between Odisha and West Bengal over the origin of Rasagola. The discussion on GI tag and historical significance along with the unique style of making the dessert, was appreciated by the audience. 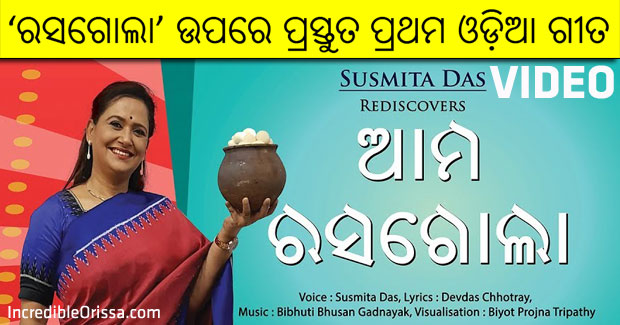