Ravenshaw University announced its Plus Three results on June 9, 2014.

Of the total 1,756 students who appeared in science, arts and commerce streams, 963 girls and 704 boys have passed in the examinations. The total pass percentage of students is 94.93 against 94.21 last year.

Girl students have outscored the boys and topped in 21 of 28 subjects.

While overall pass percentage is 94.93, the success rate of the girl students is 57.77 percent as against 42.33 percent of success by the boys.

A total of 1756 students in the Arts, Science, Commerce and Vocational streams had appeared at the examinations. 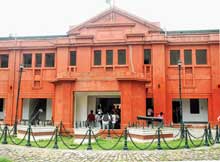 Besides, the pass percentage in BBA and HHA is 82.7 and 100 percent respectively.

Vice-chancellor B.C. Tripathy said that students would have to opt for at least three special papers beyond the regular courses as part of the choice-based credit system, which would shortly be introduced.