Do you know that founder of OYO Rooms, Ritesh Agarwal is from Odisha?

OYO Rooms is India’s largest budget hotel chain which is present in over 100 cities across the country with 20,000 rooms under its umbrella.

Ritesh, who left his home in Rayagada as a teenager to seek his fortune, started out by selling SIM cards. Today, the 21-year-old is founder and CEO of OYO Rooms, an online aggregator of budget hotel rooms. 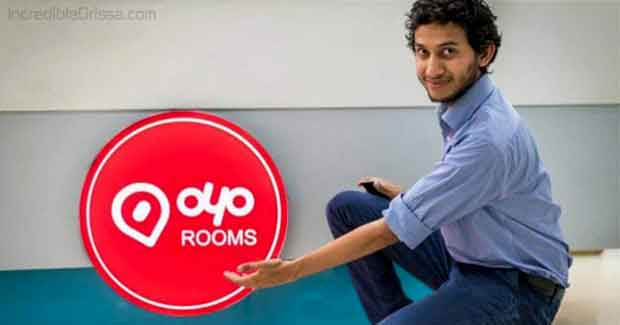 Born at Bisamkatak, Ritesh grew up in the small town of Rayagada. The young entrepreneur, who is now based in Gurgaon, says,”My childhood was similar to any small town kid’s. I was raised in a middle-class family in Rayagada. I was good at studies and played sports. The only difference was I had big dreams even as a child – I always knew I wanted to be an entrepreneur.”

Agarwal, hailing from a business family, moved to Delhi in 2011 to start his entrepreneurial journey after deciding to skip engineering college entrance exams. He had also briefly enrolled in University of London’s India campus.

It was when he was 18 that he founded Oravel Stays, which was building the Indian version of home sharing portal AirBnB. Agarwal got in touch with accelerator VentureNursery, flew down to Mumbai and got seed funding of around Rs 30 lakh after a three-month programme.

It was around the same time that Agarwal became the first Indian to be chosen for Thiel Fellowship, where he was given $100,000 grant by early Facebook investor and PayPal cofounder Peter Thiel. The fellowship is given to entrepreneurs below 20 years of age who skip college for two years to start running their own business.

“One big learning from Thiel fellowship was think really big and create an impact, without thinking if anybody has done it before,” said Agarwal, who decided to pivot the model to OYO Rooms, putting most of the Thiel grant into the business.

Now a high-flying CEO who’s constantly on the move as his business grows by leaps and bounds, Ritesh misses the simple life and people back home in Rayagada whom he credits his learning to.

The young entrepreneur speaks Telugu, Bengali, Haryanvi and a little bit of Mandarin apart from Odia! “Whenever I go to Odisha, I make it a point to converse in Odia. If you ever bump into my team and me in Odisha, you will find us mostly talking in Odia.” The odia boy also has a weakness for sweets. “I love gorging on ‘chhena poda’,” he says.

Ritesh has several business plans for his home state. he feels Odisha has huge business potential due to its abundant human and natural resources. The state offers many opportunities for entrepreneurs, he adds.

His advice to aspiring entrepreneurs in the state? “Remain commited to solving the problem you are passionate about. Also, it’s important to remain perserverant in the face of failure. Don’t give up.”