Rituraj Mohanty is the only singer from Odisha who is among Top 10 singers of India’s Raw Star.

India’s Raw Star is an Indian singing competition series which airs on Star Plus every Sunday at 7 pm. It is hosted by model-actress Gauahar Khan and mentored by singer-rapper Yo Yo Honey Singh.

Known as the spiritual sensation of India’s Raw Star, Rituraj left everyone moist eyed with his performance on ‘Abhi Mujh Mein Kahin’ song. Audience will expect the same as he will perform on Rahat Fateh Ali Khan’s ‘O Re Piya’ from ‘Aaja Nach Le’ today.

He has also sung for a Satyamev Jayate track in its first season. He was the only artiste Honey Singh was not sure about during selection, but Rituraj’s performance proved him wrong which he admitted on TV. 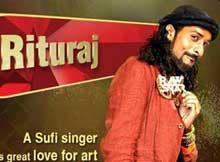 “I feel I can sing songs of that genre in a better manner and sufi singing is one of the reasons I took up singing,” he said. He has presently recorded with a number of composers including Ram Sampath and wants to continue his journey in Bollywood as a playback artiste.

“The show is such a format that you not only get a chance to sing but also perform on stage which any upcoming singer would yearn for,” he said.

6 Comments
Improve your male potency and fight back the premature ejaculation. With the help of tadalis-reviews.com you will have your healthy sexual life back in no time. Order it with Priligy online and forget about premature ejaculation once and for all.
Copyright © 2022 Incredible Orissa.
error: Content is protected !!