Independence Day celebrations in Odisha’s Rourkela caught everyone’s attention as a 17-km-long national flag was displayed in the steel city.

Working in collaboration with several voluntary organisations of the city, the organiser ‘Smile Forever’, is aiming to register the feat in Guinness Book of World Records.

The record is currently held by a Raipur foundation which had entered the Champions Book of World Record after displaying a 15-km long national tricolour flag in Chhattisgarh.

Stitching work for the flag had started six months ago and as many as 12 tailors were engaged by the NGO. Clothes having length of 45,000 metres costing Rs 17 lakh were used for manufacturing the flag.

The tricolour was held by students and denizens of the city through a human chain from Hanuman Vatika Chhak to Biju Patnaik Chhak. 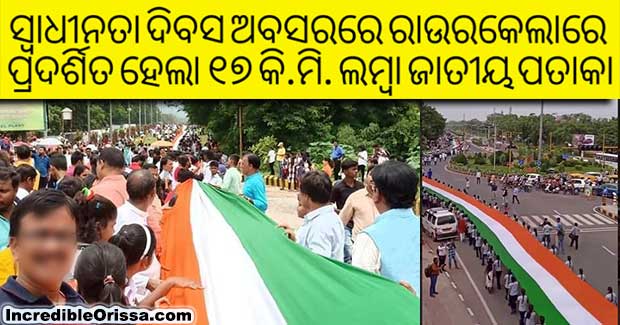