For the first time in the history of Sabar Srikhetra (Koraput), three chariots will be taken out during the Rath Yatra this year. Until last year, only one chariot were being pulled with all the three deities seated in it.

Moreover, it has also been decided that Darpadalana, the chariot of Devi Subhadra, will be pulled only by women, said Jagannath Temple Committee secretary Gadadhar Parida.

Work on the chariots for annual sojourn of Lord Jagannath, Devi Subhadra ad Lord Balabhadra in their independent chariots has already begun.

Sabara Srikhetra is considered the most important temple of Lord Jagannath, next to Puri. The Jagannath temple was built in 1972 and the practice of pulling the chariots started after consecration of the temple. Since then, the Trinity is taken in one chariot to Gundicha temple.

Every year, wearing their traditional costumes, the tribals pull the chariot to Gundicha temple, which is 200 metres from the Jagannath temple. 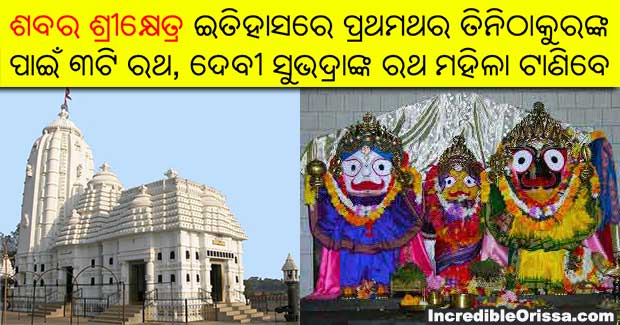