Sabitri Brata is an important ritual of married Hindu women with husbands alive. This year, Sabitri Brata will be observed on 30th May 2022 (Monday).

Odisha is remarkable for tradition of Oshas, Bratas and Melas. Sabitri Brata is a fasting day observed by all Hindu Odia married women on the Amabasya, the last day of the dark fortnight, in the month of Jyestha.

This day is most favourable for the married Hindu women whose husbands are alive. They observe it as a vow with great dedication and pray for their husband to have a long life. Married women in Odisha fast during the day and listen to the story of Sabitri and Satyaban.

Women wake up early in the morning on the Sabitri Brata day and after taking bath, wear new sarees and ornaments including bangles. All married women use red vermillion on the forehead. Sabitri is symbolically represented by the grinding stone, locally known as Sila Pua. The grinding stone is thoroughly cleaned and worshipped. Bhoga or offering to Sabitri consists of rice, wet pulses and locally available fruits like mango, jackfruit, banana, palm, date palm, etc.

The fasting begins at sunrise and ends after sunset with the evening prayers. The fast is broken by consuming the offering made to Sabitri. Women also make it a point to read or listen to the Sabitri Brata Katha mentioned in the Mahabharata.

Mythology about the festival

The Brata was named after Sabitri. She was the beautiful daughter of King Aswapati of Madra Desa. She selected Satyaban as her life partner, a prince in exile who was living in the forest with his blind father Dyumatsen.

She left the palace and lived with her husband and the in-laws in the forest. As a devoted wife and daughter-in-law, she went to great lengths to take care of them. One day while cutting wood in the forest, Satyaban’s head reeled and he fell down from a tree. Sabitri accompanied him on that day. Then Yamraj, the death God, appeared to take away his soul. Deeply hurt, Sabitri pleaded to Yamraj not to be separated from her husband. If he would take away the soul of her husband; she would also follow. Yamraj, moved by the devotion of Sabitri, returned the life of her husband. 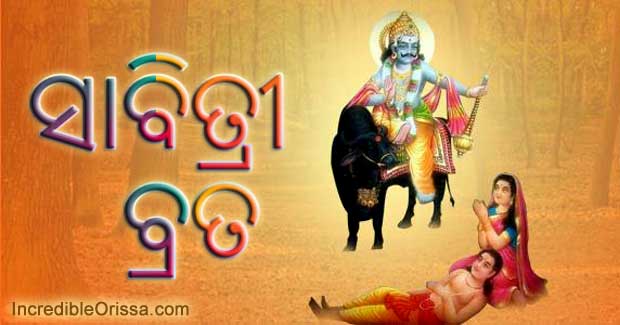