We have seen them together in their last released movie Smile Please.

Sabyasachi and Archita, who are playing the lead roles in this out-and-out comedy film, are really excited about it.

Basant Sahu’s last film, Mu Tara Kie based on an unusual love-story got very positive response. “We have finished the script and we will be going on the floors soon. Since it is a complete comedy movie, we are trying to work out a very catchy title. I think the audience will love a comedy,” Sahu said.

“Sabyasachi is a very good actor and I can surely say that both he and Archita will do magic in the movie,” he added.

Sabyasachi’s character in this movie is of an unemployed youth, who got married to a girl of rich family. Archita is playing the rich girl’s character. After marriage, the boy is trying to hide the truth and creating farce in the house. 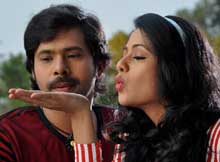 Goodly Rath is composing the music for the flick, which is scheduled to hit the theatres sometime in January 2015.

We will update the title of the film, when they declare it.