It isn’t every day that actors or models in Mumbai flaunt Odissi handloom and tribal textile on ramp. Sabyasachi managed to rope in Big Boss co-contestant and model Arshi Khan as the show-stopper along with actor-cum-model Sachin Khurana.

Fifteen models draped in his designs aptly titled, ‘Keembdanti’, sashayed down the ramp to loud cheers and claps from the audience. The show, which received great response from fashionistas in Mumbai, has now motivated Shagoon to do more such events to make people aware about the rich handlloom tradition of the state.

“I wish to revive the dying fabrics of Odisha and highlight them on a bigger platform. Fortunately, my designs were in sync with the theme of the fashion show. Odisha handloom like Berhampuri silk are not as popular as Sambalpuri and these need to be revived,” said Sabyasachi aka Shagoon, who earlier hosted a popular cookery show in a regional channel.

“People loved the men’s collection of kurtas and tribal saree weaves of Odisha. Some of them placed orders too. There were 12 designs for men, made out of Sambalpuri Kotpad and Soura tribal fabrics and six saree weaves of Soura, Dongaria and Kotpad,” he added. 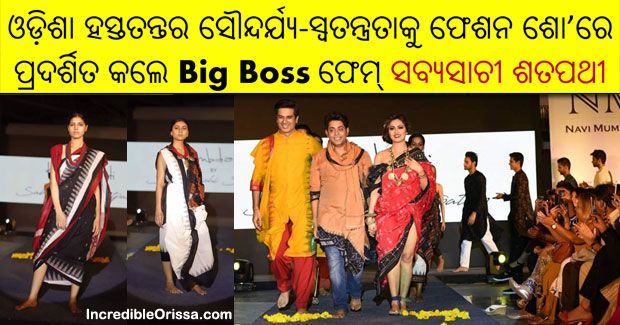