In what can be termed as a ‘treat’ for Salman Khan fans across Odisha, the superstar will join the Hockey World Cup Celebrations event scheduled to be held at the Barabati Stadium in Cuttack on November 28.

As per reliable sources, the ‘Dabangg’ star has been contacted by the concerned organisers of the state government. Though the actor has replied in affirmative only over telephone due to his busy shooting schedule, a formal statement in this regard is yet to be issued.

Music Maestro AR Rahman will be performing both at the Opening Ceremony of the World Cup on 27th November in Bhubaneswar and at the World Cup Celebrations event at Barabati Stadium on 28th November.

While Shah Rukh Khan will steal the limelight in the Capital city, Salman will share be the star in the Silver City. Madhuri Dixit will also perform at the opening ceremony event which has become a craze for the ticket aspirants in the state.

The twin cities are ready to host the glittering inaugural ceremonies of the Men’s Hockey World Cup that will be played here from November 28 to December 16. Sixteen hockey teams, including host India, will be vying for the coveted title. 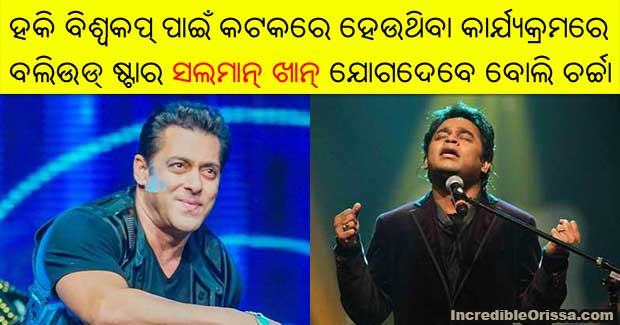