Air Odisha will start flight service between Sambalpur and Bhubaneswar, for the first time in the State.

People from Sambalpur can now fly to Bhubaneswar in an hour’s time, which otherwise takes at least six hours by road.

The passenger flight service between the two cities will start from the last week of December. The service would be provided by Air Odisha Aviation Private Limited and the State Government has given its nod.

“A meeting to finalise the date of the trial flight will take place shortly,” company director Trideep Rout said.

“A nine-seater aircraft will fly between Bhubaneswar and Sambalpur. Tickets would cost around Rs 2,000 a person. To begin with, there will be one flight daily between the two cities. The state government will provide the required support such as security, fire service, parking and other requirements at Jamadarpali Airstrip,” he said.

Jamadarpali Airstrip, located 10 km from the Sambalpur city, is a well-maintained facility and used for the landing of helicopters and small aircrafts. It was commissioned in the late 1950s. Prime Minister Narendra Modi, during his poll campaign last year, had used the 1.2km airstrip while arriving the city by a small aircraft.

Air Odisha expressed hope that the service would get good response from the region, which has several industrial units. 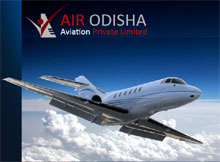 Sambalpur city is emerging as an education hub with four state-run universities and the Indian Institute of Management (IIM) here. Due to the lack of proper communication, many teachers and experts prefer not to visit the area. An air service will certainly help eminent academics visiting these institutes.