Minister of state for handloom and textile Snehangini Chhuria has announced that the Odisha government is planning to introduce uniforms made in Sambalpuri handlooms in all the government educational institutions.

The dress code will be initially implemented in the colleges from the next academic session. Later, the plan will be initiated at the schools as well.

“I have discussed the matter with the mass education minister and concerned secretaries time and again. As weaving handloom clothes takes time, it will not be possible to implement the plan across the state immediately. It could be done in a phased manner,” handloom and textile minister Snehangini Chhuria said.

The minister said that due to the high cost of Sambalpuri tie and dye, the next generation of weavers were not interested in taking up their traditional profession. The government is making efforts to reduce the prices of Sambalpuri fabric. The chief minister has also written to the Centre to reduce the GST on handloom products.

Artists feel the move will be helpful in creating awareness among the upcoming generations about the traditional fabrics of the state.

“Children and youth these days are mostly inclined towards western attires. Although a number of young entrepreneurs from the state have taken the initiative to promote handloom and handicraft from the state, it is very important that a sense of belongingness is created in them,” said Jagannath Meher, a senior weaver.

He further said that the move would be helpful in strengthening the economy of the state, as it will bring about more employment. 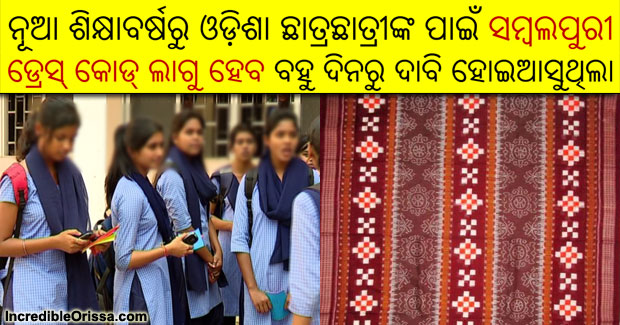