Do you know that Bollywood’s popular sound designer Nihar Ranjan Samal is originally from Odisha? He has recently worked in ‘Sanju’ movie, the upcoming biopic on the tumultuous life of Bollywood actor Sanjay Dutt.

The award-winning sound designer is known for his work in critically acclaimed movies such as ‘Padmaavat’, ‘3 Idiots’, ‘Madras Cafe’, ‘PK’, ‘Bajirao Mastani’ and ‘Piku’ among others.

A native of Jajpur district, Nihar today has become a favourite of director Raju Hirani. The bonding between the two is clear from the fact that the Odia techie has worked in three films directed by Hirani, all of which were big hits.

Nihar, who won the National Award for his brilliant work in ‘Madras Café’ in 2013, is extremely happy with his work in ‘Sanju’ for which he devoted 70 days with complete dedication and passion.

The Odia technician, who also shares a great camaraderie with Aamir Khan having worked with him in three films including ‘3 Idiots’, ‘PK’ and ‘Dangal’, is today considered one of the most-sought after names in Bollywood when it comes to sound designing.

The talented sound designer has so far worked with almost all big names in the Hindi film industry and impressed all of them with his brilliant work. 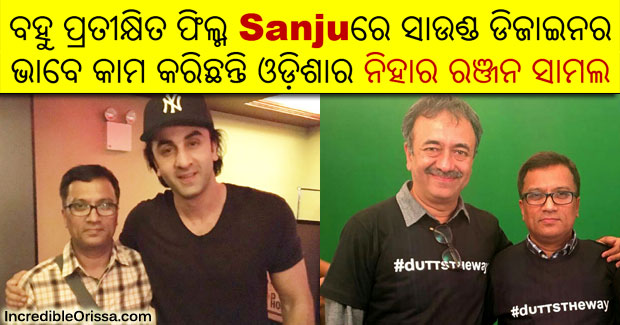