The Sarana Srikhetra Jagannath temple at Marda village in Ganjam district was the safe abode of the three deities of the Jagannath temple in Puri 282 years ago when the three idols had remained in the shrine for 28 months – from December 29, 1733 to April 1736.

And, there are no deities inside the temple now. But still, all rituals are performed every day in front of an empty pedestal by five generations of priests since then. While rath yatra is being celebrated in Lord Jagannath temples across Odisha and also outside, the grandeur of the festival is missing at this temple since the beginning as a tradition.

This temple became the safe abode of the deities when the Puri Jagannath temple had come under attack from the Muslim invaders. Consequently, the then Puri king, Gajapati Ramchandra Deb, had these deities secretly transported from Puri to Marda. Masons from Mathura constructed the temple in a record time of two months at a secluded place.

“The temple is an epitome of architectural grandeur of medieval Odisha. About 300 armed soldiers of Athagada used to guard the deities day and night during that period. The deities returned to Puri in 1736,” said Anantaram Kar, a Jagannath cult researcher in Ganjam.

The temple is a two-chambered Pidha style with Jagmohan and Viman. Marda is considered as the second home of Jagannath. Even after the deities returned to Puri in 1736, the ruler of Athagada, Jagannath Harichandan Jagadev had preferred to keep the temple without deity to preserve the memory of the great event.

The secret journey of the deities from the Puri temple to the Chadehibuda hills on the Chilika banks, Chapalihatibana, Kujangagada, Kapileswarpur, Gopalpur, Tikali, Gajapada, Balangir, Manitrigada and finally to Marda temple has been chronicled in Madala Panji (temple almanac). 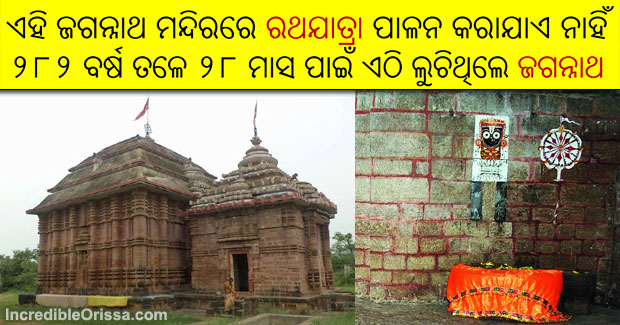