Chaar Kadam (PK) track is originally sung by Shaan & Shreya Ghoshal, composed by Shantanu Moitra and written by Swanand Kirkire. Judges of the show – Himesh Reshammiya, Javed Ali and Neha Kakkar appreciated Satyajeet’s singing. Both got 100% votes from the jury.

The episode of Sa Re Ga Ma Pa Lil Champs was special as Sushant Singh Rajput and Kriti Sanon came to promote Raabta. The Bollywood hunk thanked Zee TV at the onset for giving him the courage to chase his dreams.

One of the most talented contestants on the show are Satyajeet Jena and Shanmukhpriya. They put up one of the best performances as they sang Chaar Kadam on the show. Sushant looked moved as he heard them and even spotted humming the song. They added their own harkat to the number and Sushant got up from his seat to clap for them. The Bollywood hunk also spoke about how Chaar Kadam changed his perception as an actor amongst fans.

You can watch Satyajeet’s performance on Chaar Kadam song here. 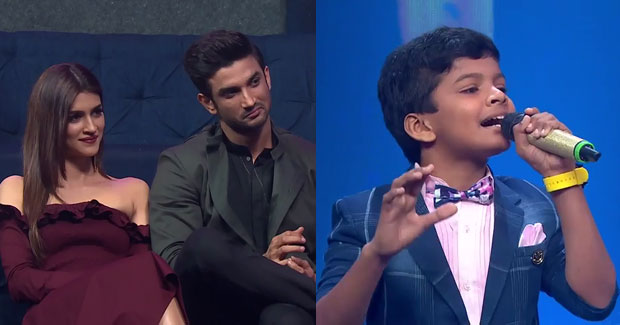