Janam Janam track is originally sung by Atif Aslam, composed by Pritam and written by Irshad Kamil. Judges of the show – Himesh Reshammiya, Javed Ali and Neha Kakkar appreciated Satyajeet’s singing. He got 100% votes from the jury after a long time.

ALSO WATCH: Roja Janeman song in the voice of Satyajeet

To celebrate Mother’s Day, Sridevi invited as special guest in this episode. She promoted her upcoming film ‘MOM’ on the show. Sridevi was so happy with Satyajeet Jena’s act that she couldn’t stop gushing.

After the act, as he stated how he misses his mother’s food, Satyajeet was pleased to see his mother as the organisers held a small surprise. His mother came on stage with food for him. The entire audience was left in an emotional state.

Now you can vote for Satyajeet to see him as the winner of the show. Please type SRGMP SAT and send it to 57575. To vote for your favourite Li’l Champ, logon to www.lilchamps.ozee.com/voting and Vote for your favorite singer contestant.

You can watch Satyajeet’s performance on Janam Janam song here. 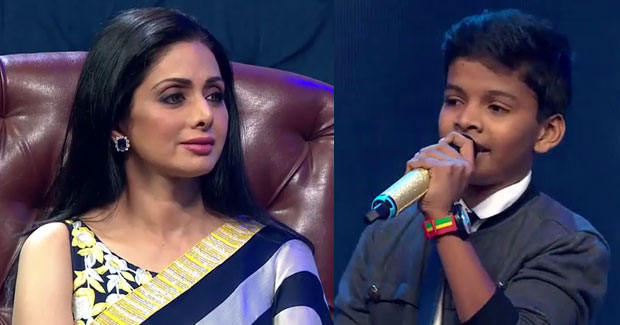