Roja Janeman track is originally sung by SP Balasubramaniam, composed by AR Rahman and written by PK Mishra. Judges of the show – Himesh Reshammiya, Javed Ali and Neha Kakkar appreciated Satyajeet’s singing. He got 99% votes from the jury.

For Saturday’s episode, the special celebrity guest was none other than Oscar award winner, AR Rahman. Everybody on the sets starting from the contestants to the judges, they were all excited for the celebrated composer’s visit. It is a big deal when you rub shoulders with a phenomenon like Rahman. The evening was good as all the kids put in their all to deliver a brilliant performance. The maestro was impressed by everyone as they took him down the memory lane.

Satyajeet Jena performed on the song, Roja. Having learnt that he is a composer, Rahman asked him to sing one of his compositions. After his performance, he was so impressed that he asked Satyajeet to come to his studio for a week’s internship!

You can watch Satyajeet’s performance on Roja Janeman song here. 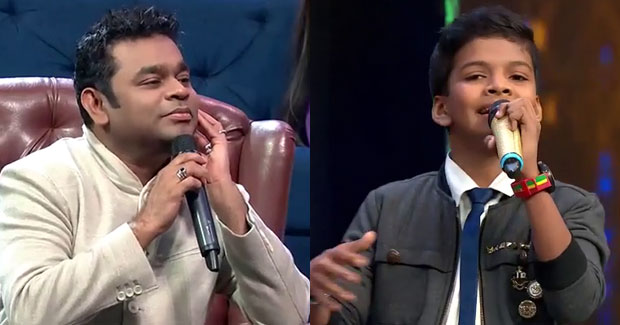