Odisha boy Satyarth Nayak appointed as a lead writer for Sony’s upcoming mega-budget historical TV series PORUS. Touted as the most expensive show ever produced in India, this magnum opus shall trace the parallel lives of Porus and Alexander, culminating in the legendary Battle of Hydaspes.

Satyarth Nayak is an author & screen-writer based in New Delhi. Holding a masters in English Literature from St. Stephen’s, he is a former Correspondent at CNN-IBN, Delhi and was felicitated with the SAARC Heal Honour for Health Reporting in India in 2008.

PORUS is being produced by Swastik Productions that have created similar historical & mythological mega-budget shows like Mahabharat, Suryaputra Karna, Razia Sultan, Shani and Mahakali. With a reported budget of 500 crores, Porus is touted to be the most expensive TV serial ever produced in India. The show is being shot extensively in Thailand and its First Look was recently released on YouTube to a fantastic response. The show will be aired on Sony TV.

Satyarth’s debut novel The Emperor’s Riddles released in 2014 and became a best-selling thriller. Described as ‘a history meets mystery’ by Times of India, ‘a gripping tale of intrigue’ by Hindustan Times, ‘a heady mix’ by The Hindu, ‘a book that opened a different avenue for budding writers’ by Indian Express and ‘an extraordinary tale of riddles’ by Yahoo, the thriller takes its readers on a trail of cryptic riddles connected to the royal secret of an ancient Indian Emperor.

Hailing from Odisha, Satyarth was felicitated with the Shri Award for Literature by Rosalin Patasani’s Parichay Foundation at KIITS, Bhubaneswar last year. A regular speaker at the Odisha Literature Festival organised by New Indian Express, Satyarth was also invited by Jagi Panda as a guest for the Achievers Special episode of OTV’S popular talk show Utha Jaga Odisha. 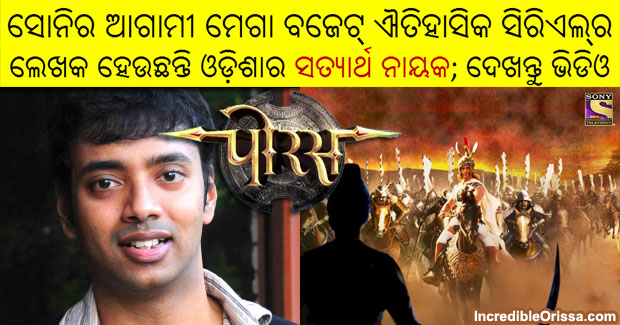