The second Chilika Fresh outlet, which opened at IRC village (Nayapalli) in Capital city Bhubaneswar, has a lot of new things to offer to customers.

Apart from selling fresh fish from Chilika and its surrounding water bodies, the outlet is also selling fish pickles and ready-to-eat fish bhujias. It has also, for the first time, introduced frozen fish.

It was inaugurated by Agriculture Minister Pradeep Maharathy on Sunday near the directorate of horticulture campus.

The outlet has been set up at a cost of Rs 33 lakh with FISHFED, the apex fisheries cooperative organisation, promoting the linkage between the consumers and fishermen directly without the involvement of middlemen.

Besides fresh fish and solar dried fish, ready to cook export quality seafood will also be available for sale. The outlet has been designed to educate public on aquatic species and will also have an aquarium. FISHFED is also planning to start online sale of Chilika lake produce soon. 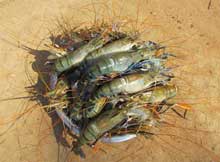 When asked whether more such outlets would be opened in the twin cities, a senior fisheries official said: “We are not getting land for the project. However, the next Chilika Fresh outlet in the city is likely to open near the Chicken Fresh outlet in Saheed Nagar.”

The first outlet in the city opened in September last year at Siripur has been doing roaring business. It has had managed to sell produce to the tune of Rs 35 lakh as of date.