Days after being nominated to the Rajya Sabha, internationally acclaimed sculptor Raghunath Mohapatra said that his dream of creating second Konark temple (famous Sun Temple) will now become a reality.

The eminent stone artist, who has been honoured with Padma Vibhushan for his contribution towards preservation of ancient monuments and architectural structures, said that he is hopeful that the Centre and Odisha government would support him in his mission.

Raghunath Mohapatra expressed gratitude to Prime Minister Narendra Modi. “I had met him to plead for funds for my dream project of building a second Konark temple, which would cost a whopping Rs. 500 crores. While I have bought some land to build the temple, I cannot do it on my own. The Prime Minister gave me a patient hearing. Only he and Lord Jagannath know what persuaded him to choose me for this honour,” Mohapatra said.

Constructed in the 13th century, the Sun Temple at Konark in Puri district was conceived as a gigantic chariot of the Sun God with 12 pairs of exquisitely ornamented wheels pulled by seven horses.

However, most of the structures of the Konark temple are now in ruins. Union Petroleum Minister Dharmendra Pradhan extended support to the sculptor’s ambitious project and said the whole country would back his endeavour.

The ruling BJD also extended support to Mohapatra’s plan to create a second Konark temple, but asked Pradhan to refrain from playing politics over Konark temple. 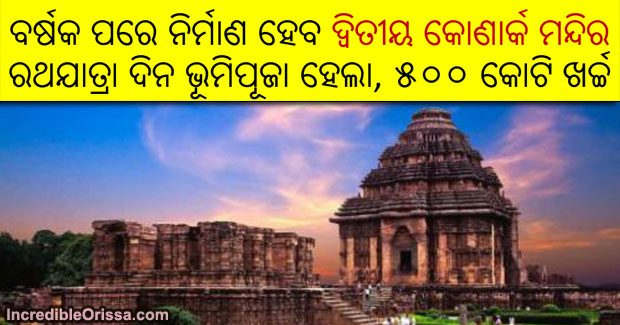