Senior Odia actor Shanti Swarup Mishra (Tiku) and his friend were shot at by an unidentified person at the former’s house in Odisha’s Sambalpur city on Friday night.

Two bullets have reportedly hit Mishra on his chest while one bullet hit the upper arm of his friend. However, the miscreant managed to escape. 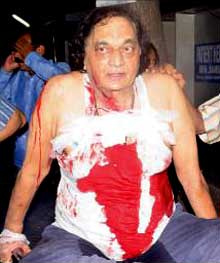 The incident took place at about 8.30 PM. Preliminary investigation has revealed that the incident was the fallout of a land dispute, police said.

It may be mentioned that the 60-year-old Shanti Swarup Mishra had acted in three Odia movies – Mana Akasha, Krushna Sudama and Bandhu Mohanty.