In a major embarrassment for Shree Jagannath Temple Administration (SJTA), the Rashtrapati Bhavan has expressed strong displeasure over inappropriate behaviour of some servitors of the temple towards President Ram Nath Kovind and his wife Savita Kovind, the First Lady of India, during their visit to the temple in March.

As per reports, during the visit of the first citizen of the nation and his wife to the temple on March 18, some servitors allegedly nudged the two while both were having darshan of the deities.

This apart, a Khuntia Mekap servitor allegedly did not make room for the President while he was offering prayers in the sanctum sanctorum, reports added.

A discussion over the incident was held in the temple managing committee meeting recently. The Shree Jagannath Temple Administration (SJTA) has also decided to serve show cause notice to the erring servitors over the matter.

The incident has once again brought to fore the recurring complaints on the ‘rude behaviour’ and harassment of devotees, particularly women, by servitors inside Puri Srimandir. And such an incident happening with the First Lady of the country reflects the gravity of the situation. 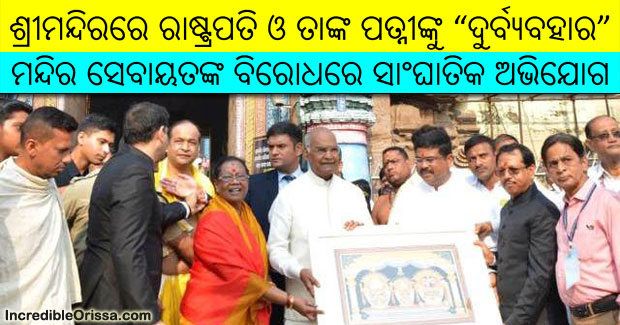