According to some reports, the two of them are coming together for what looks like a Hockey Anthem. Shah Rukh Khan, on Sunday, took to his Instagram to share an interesting picture of himself with the music maestro AR Rahman. In the picture, the two can be seen wearing black sunglasses while posing opposite mirrors and holding hockey sticks in their hands.

He captioned the picture as, “Spent a few hours with the prides of India, Hockey & @arrahman and the talented #ravivarman Thank u the whole team for making me feel so wonderful. #HeartBeatsForHockey.”And interestingly, the actor has also tagged cinematographer, Ravi Varman in it.

The Hockey World Cup song titled Jai Hind Hind, Jai India, in itself has pulsating rhythm composed by AR Rahman and magical lyrics penned by Gulzar. The music video will showcase the new India and have visual elements from the contemporary and urbane to the grass-root India even, as it’s the core of hockey and Team India.

The electric video together with the HWC Song are sure to inspire every Indian to get behind Hockey, as the Odisha Hockey Men’s World Cup Bhubaneswar 2018 kickstarts in a month’s time.

The song and video are slated to release at the end of the month when Team India returns from the Asian Champions Trophy in Muscat. Durga Puja (Dussehra) in Odisha 2018 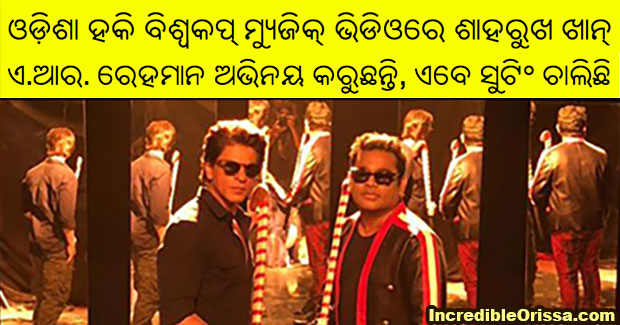