He sang Teri Meri Kahaani from the movie ‘Gabbar’ and struck a chord with the judges, Shankar Mahadevan, Monali Thakur and Diljit Dosanjh, who also voted for him. He also garnered a whopping 94% votes.

WATCH: Russian girls dance to the tune of Sambalpuri song in Moscow

It was an emotional moment for Shasank as his wife and daughter daughter joined him on the stage prior to his performance. A short video showcased this 28-year-old singer’s struggles for the past 10 years and he expressed how difficult it has been for him to make a name for himself in the music industry.

However, he captivated the audience and succeeded in proceeding to the next round. While Diljit Dosanjh compared him to south superstar Prabhas of ‘Baahubali’ fame because of his hairstyle, Shankar Mahadevan said that he sang like popular playback singer Arijit Singh and advised him to work hard to be on par with other contestants. Monali Thakur asked him to keep faith and discouraged him from even thinking about quitting music. Diljit Dosanjh also offered his seat to Shasank’s wife and daughter to witness the performance from the judge’s chair.

Shasank is a known name in Odia music industry and has sung in movies, music videos and performed at stage shows across the state. 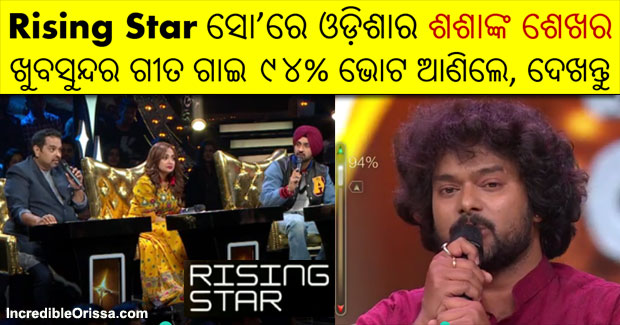