The Lingaraj temple administration fixed the timing of Mahadeep as well as other rituals and darshan timings for the auspicious Maha Shivaratri scheduled on 21st February.

As per the decision by the Lingaraj temple servitors at a meeting for the celebration of Maha Shivaratri, the ‘Mahadeep’ will be raised atop the temple at 10.00 pm.

The Lingaraj temple will be opened after 2.30 am on February 21 at night. The ‘Mangal Arati’ and Abakash will be conducted at 3.00 am. The ‘Sahana Mela’ darshan will continue from 3.30 am till 11.30 am since morning on Maha Shivaratri.

Besides, the authorities have decided to fill the vacant place in front of the temple with sand and tiles will be laid on it ahead of annual festival of Lord Shiva. Also, the CCTV cameras will be installed around the temple for security reason. 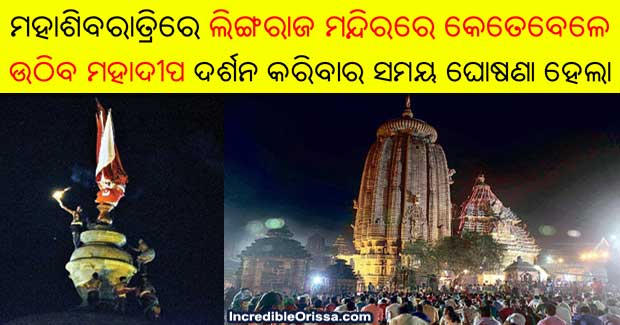