Odia filmmaker Biswanath Rath’s multi-award winning short films: “Kar Bhalaa” and “The ‘Right’ Glass” have been selected for screening at Goldensun Short Film Festival to be held in Malta (Europe) from 4th Jan to 12th Jan 2016.

Both the films deal with social issues.

On the other side, the social ad-film ‘The ‘Right’ Glass’, [written & directed by Biswanath Rath and produced by Bhubaneswar based NGO ‘We 4 You”, based on the theme ‘Child Right’, reminds every one of the inviolable human rights that each and every child is born with and the responsibility that each of us. As a member of family, community and society has in ensuring that no child is denied his or her basic rights. Director Biswanath says, “Child labour is one among the many major issues related to Child Rights and happens to be the one widely prevailing. But more than the issue, it’s everyone’s ignorance towards the problem, which worsens this problem. ‘The ‘Right’ Glass’ is an attempt in making everyone realize this harsh reality of our society.”

When asked about the significance of the title, the filmmaker says, “Sunglasses prevents us from sun rays. Likewise, “The ‘Right’ Glass” prevents us from seeing/realizing the most critical right of a child: ‘The Right to Education’. Interestingly, this is my first ‘silent’ film and also my first film to be shot in Bhubaneswar/Odisha. I was fortunate to have infinite support and trust of a really dedicated team who made it possible to shoot such a film in just 5 hours, with such limited resources and budget.” 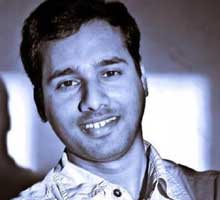 The filmmaker has also directed the International Music Video (English) “Feel The Passion” which has gone viral in social media. It has achieved a unique milestone of crossing 1 Lakh Youtube views within just 2 months of its release in VEVO Channel. This makes it the first such International Music Video by an Odia Director to have received such huge response. Interestingly the filmmaker has also directed a Tamil Music Video (for a leading Media Brand), which is also the first such Tamil project to be directed by an Odia Director.

Biswanath aims to make films with global appeal based on Indian cultures and traditions in general, Odia culture in specific. Presently he is working on the script of his first feature film.