Congress president Sonia Gandhi would address election rallies in Mayurbhanj and Balasore on April 11 (Friday). Earlier, she was scheduled to visit the state on April 10, party sources informed on Tuesday.

The change in the tour schedule of the Congress president, is believed to counter the impact of Modi’s Odisha visit and to salvage the position of the party’s Lok Sabha candidate Srikant Jena whose fortune in his old seat appears to be dipping by the day.

BJP’s prime ministerial candidate Narendra Modi will also be visiting Balasore on the same day to campaign for party’s Lok Sabha candidate Pratap Sarangi who is gaining in strength across the seven assembly segments.

Senior BJP leader and Leader of the Opposition in Lok Sabha Sushma Swaraj is also scheduled to visit Odisha on April 10. Swaraj, leader of the opposition in the outgoing Lok Sabha, will hit the campaign trail in Rairangpur, Anandpur and Mahakalpada. 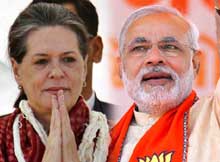 Either Rahul or Singh will address a meeting at Cuttack. If the Prime Minister is not able to make it to Cuttack, Rahul or any other senior Congress leader will visit the constituency. Popular Odia cinestar Aparajita Mohanty has been fielded by Congress from the Cuttack Lok Sabha constituency against BJD sitting MP Bhartruhari Mahtab.

5 Comments
Improve your male potency and fight back the premature ejaculation. With the help of tadalis-reviews.com you will have your healthy sexual life back in no time. Order it with Priligy online and forget about premature ejaculation once and for all.
Copyright © 2021 Incredible Orissa.
error: Content is protected !!