The railways on Thursday announced to bring back pilgrims of Odisha’s Kendrapara district who are stranded at Chennai Egmore railway station on account of cancellation of trains due to massive flood in Chennai.

According to East Coast Railway (ECoR) sources, a special train would leave for Kolkata from Chennai Beach station at 8.20 am on Friday with stoppages at Renigunta, Gudur, Vijayawada, Rajahmundry, Duvvada, Vizianagaram, Bhubaneswar and Kharagpur.

Sources said hundreds of Odias are stranded at different railway stations in the rain-battered state.

The decision of the Railways came following a request made by senior BJD leader and Kendrapara MP Baijayant Panda in a letter to Railway minister Suresh Prabhu on Thursday.

Meanwhile, the ECoR has cancelled 28 trains and diverted nine others keeping in view the grim situation in Chennai and other parts of Tamil Nadu. Two others were rescheduled for safety of passengers and trains. 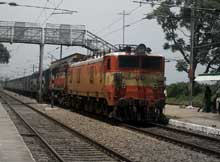 ALSO READ: Break traffic rule in Bhubaneswar, get clicked and then fined