In a bid to prevent stray dogs from being hit by vehicles in night, some animal lovers in Bhubaneswar have started an initiative by fitting these animals with reflective collar belts.

Animal Welfare Trust Ekamra started a campaign named “Illuminating Lives”. As the name suggests, it is an initiative to illuminate or in other words make animals visible even in the dark so that road accidents can be drastically reduced.

“We started the drive on Sunday evening and tied the reflective collar around necks of nearly 50 stray dogs along the national highway-16 in Khandagiri area. Our purpose is to cover all stray dogs and cattle along the NH,” AWTE founder Purabi Patra said.

A recent enumeration by the Bhubaneswar Municipal Corporation (BMC) put the population of stray dogs at over 12,000. Stray animals roaming around the city have been posing a tough challenge for the civic body and traffic police. Since June-end, the BMC has not been able to conduct sterilization of dogs due to absence of veterinary doctors. 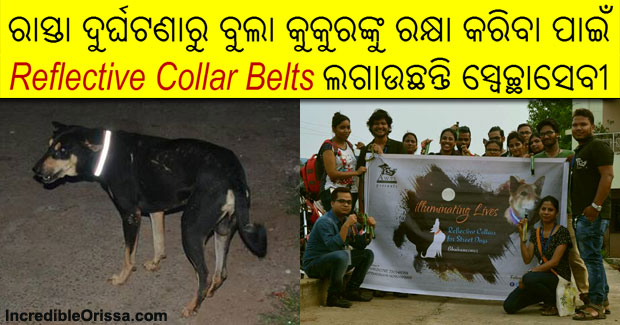