A stunt biker died while performing daredevil acts in ‘Maut Ka Kuan’ at Jeypore in Odisha on Saturday night. The deceased has been identified as Jitu Singh of Raipur.

According to sources, two bikes and two cars drove continuously at specified speed were performing stunts in the 30-foot deep well. The incident took place after a car apparently lost balance and fell on the biker Jitu. He was immediately rescued by his colleagues and taken to a private hospital where Jitu died. The car driver sustained minor injuries.

According to sources, Guria Circus and Meena Bazaar were set up by a Ranchi-based businessman about 15 days back and had been drawing huge crowd every evening. The first such incident in the town has left the onlookers shocked.

The district police today arrested two persons including the show organiser. The police arrested the ‘Maut Ka Kuan’ show’s organiser Chotu Singh and car driver Mohammed Firoze Ansari while holding the duo responsible for the death of the stunt biker.

The matter came to the fore after the video footage was telecast on media mounting pressure on the district administration to act. 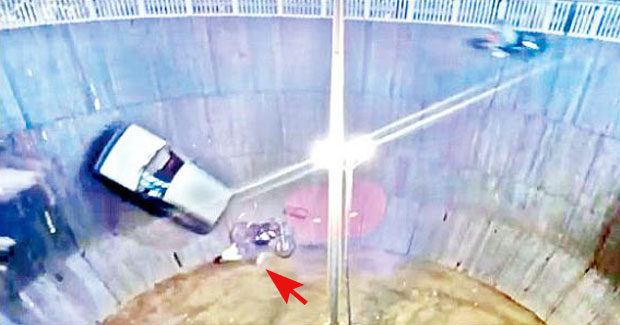