Goddess Subhadra tied ‘rakhi’ to Lord Jagannath and Lord Balabhadra on the occasion of ‘Rakhi Purnima’ at Sri Mandira in Puri, Odisha.

Puri resident Jagannath Patra and his family have created special rakhis for the divine sibling on the occasion. Patra, a member of the Patara Bisoi community, is the rakhi maker for the divine trio. 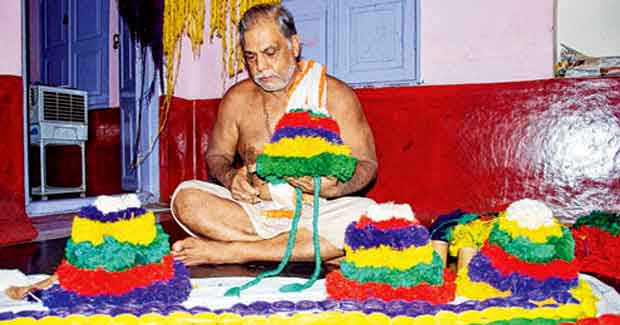 The 67-year-old has been making four rakhis for Lord Jagannath and Lord Balabhadra for decades now.

“I learnt the craft from my father. We begin the work about 10 to 12 days before Rakhsha Bandhan and complete them a couple of days before the festival. We create four rakhis, one to be tied on each hand of the two brothers of Goddess Subhadra,” he said.

“The temple administration provides us with paata cloth every year. We collect these and dye them in five colours — blue, red, green, yellow and white — and then dry them for a couple of days. We cut these coloured cloths and sew them into concentric circles stitched one atop another with the lowest disc being the largest,” said Santosh.

The base of each of the four rakhis is a circle of a 10-inch diameter. The subsequent circles stitched on them are smaller and finally a colourful central sphere of cloth at the top makes the rakhis look pretty. The thread of the rakhis is also special.

Rakhi is also observed as the birthday of Lord Balabhadra, who is considered the lord of farmers. Hence, Rakhsha Bandhan, also known as Gamha Purnima, is also celebrated as an agricultural festival and rakhis are tied to cattle, too. 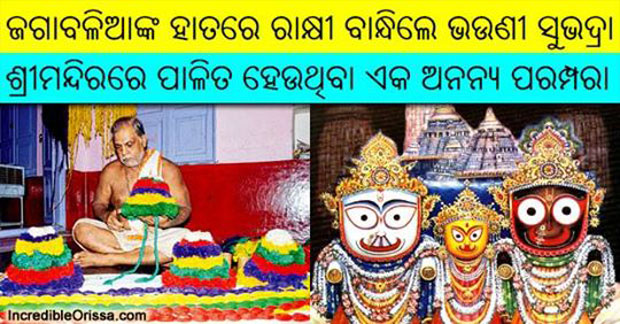