Subham Nayak becomes the latest player from Odisha to play international cricket which is a great news for our state cricket.

Subham made his debut for India Under-19 team against the Afghanistan U-19 side in the ongoing tri-series which also involves Bangladesh team.

Subham picked up his first international wicket by bowling 7 overs and made 2 runs (not out) in this match played at the Jadavpur University ground in Kolkata on Saturday.

The Indian Under-19 cricket team registered their second successive win in the tri-series as they beat Afghanistan by 33 runs.

The series will be a platform for preparations for all the three sides as the U-19 World Cup is just a couple of months away. 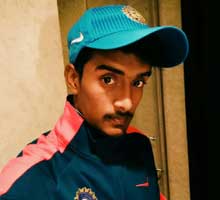 The teams will play twice against each other and the top two outfits will battle it out in the final on November 29.