The theme for the competition was “The world around us”. Pattnaik was the Indian representative in the competition, where twenty-five sculptors from different countries participated.

Sudarsan secured the gold for his sand sculpture of Lord Ganesh with message ‘Go Green’ at the Championship held between April 22nd and 28th at Kolomenskoye, Moscow in Russia.

The prize was awarded to Pattnaik in a ceremony by Pavel Menikov, the chief organiser of the event. Sudarsan later called on Pankaj Saran, the Indian ambassador to Russia, who congratulated him on winning the medal.

Last year, Sudarsan had won the gold medal in Moscow for his sand sculpture of Mahatma Gandhi on world peace. Recently, he created the world’s tallest sand castle on Puri beach in Odisha which got a place in the Guinness World Records.

ALSO READ: First Odia woman to be a flight commander in an international airlines 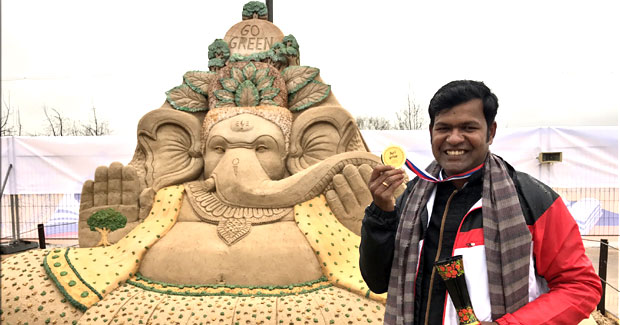