Sudarsan’s name was selected for the prestigious post by the chief minister. Earlier a selection committee, headed by the Vice-chancellor of Utkal University of Culture, had placed three names before the CM, official sources said.

He has also bagged various national award like National Youth award (2004-2005), National Tourism award (2005-2006), People of the year award by Limca Book in 2009 and Young Indian leadership award by CNN IBN in 2010; He has been felicitated by Her Excellency president of India Smt. Pratibha Devi Singh Patil during her visit to Puri. His art performance was also appreciated by honorable dignitaries the president of India, the prime minister of India, speaker of Lok sabha and the Governor of State. He also got Honorary Doctorate from Berhampur University, Odisha in 2012. In this year he set a Guinness World record for creating World’s tallest sand castle. In 2014 he has honoured Padma Shri By Govt of India.

Reacting to the appointment, Sudarsan Pattnaik said: “I will like to thank the chief minister for giving me a chance to promote art and culture of the state. I’ll work to uplift the artists from across the state.”

ALSO READ: Roads and streets of Bhubaneswar to be sweeped through machines 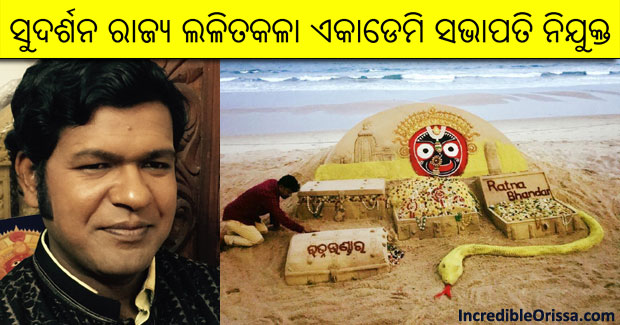