After Telangana MP Kavitha Kalvakuntla’s awareness drive ‘gift a helmet’ created a buzz on Twitter, Sudarsan Pattnaik took to Puri beach and promoted her campaign through a sand art.

After chief minister Naveen Patnaik, it was the turn of famed sand artist Sudarsan Pattnaik to get inspired by Nizambad MP’s online campaign on road safety. She gifted her brother a helmet on the occasion of Raksha Bandhan.

“The Telangana chief minister K Chandrasekhar Rao’s MP daughter appreciated my art and thanked me for supporting her campaign. Through my art, I appealed to all sisters to gift helmet to their brothers for their safety,” Pattnaik said.

Earlier on August 2, chief minister Naveen Patnaik seconded Kavitha and tweeted: “Appreciate & share the concern of @RaoKavitha for #RoadSafety. Urge all to join noble initiative which will raise awareness in the society.”

Wary of road accidents and deaths of a large number of helmetless bikers across the country, the Supreme Court committee on road safety led by justice K S Radhakrishnan has been asking all states to take action against people not wearing helmets. But its enforcement is largely confined to the twin cities of Bhubaneswar and Cuttack. 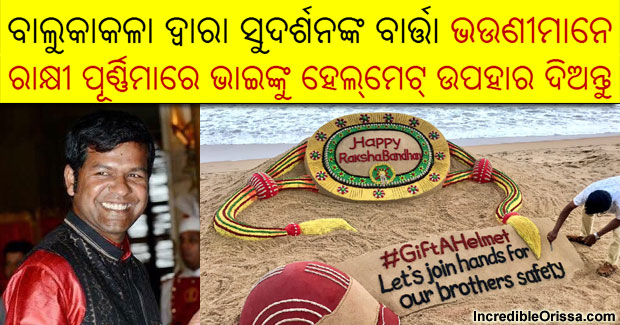