The week-long competition had started on April 21 at Kolomenskoye, Moscow, where 20 top sculptors from across the world had displayed their craft. After the competition, an exhibition is being held there since then.

The 15-foot-high sand sculpture conveys a message of non-violence and peace. Sudarsan Pattnaik’s sculpture has got 60,000 votes out of the total 80,000 votes from the visitors to the exhibition, according to a letter by the event’s organiser Pavel Minilkov.

“It is a really a pride moment for me that my sculpture is liked by so many people,” Pattnaik told PTI.

Sudarsan Pattnaik has participated in more than 50 international sand sculpture championships across the world and won many awards for the country.

In 2014, he was awarded Padma Shri, the fourth highest civilian award in India.

WATCH: Russian girls dance to the tune of Sambalpuri song in Moscow 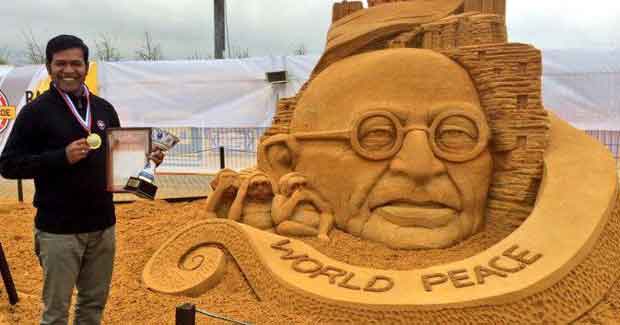