Odisha sand artist Sudarsan Pattnaik has constructed two toilets for fishermen in Puri with his prize money. The sand artist has contributed the award money he received recently for construction of two toilets at Penthakata Slum in the Pilgrim Town.

When he came to know that the slum dwellers are defecating in the open, he came forward to take the initiative for construction of the toilets where mostly fisher folks are residing.

The renowned artist constructed the toilets yesterday after he received an invitation from Prime Minister Narendra Modi last week to participate in cleanliness campaign.

“Lets us ensure that the coming days are about living the Mantra of Swachhata Hi Seva. Leading up to Gandhi Jayanti, we can encourage widespread support for, and participation in cleanliness initiatives across India. I personally invite you to lend your support to the Swachhata Hi Seva movement and dedicate some time for the cause of a Swachh Bharat. Your participation will further inspire others to be a part of the movement,” Narendra Modi said in his letter to Pattnaik.

Patnaik is scheduled to participate in Swachhata Hi Seva campaign at Chilika tomorrow. ‘Swachhata Hi Seva’ is a cleanliness drive by Centre under Swachh Bharat Mission. President Ram Nath Kovind earlier this month launched a nationwide campaign to reignite the cleanliness movement by mobilising people’s support in the fortnight to October 2. 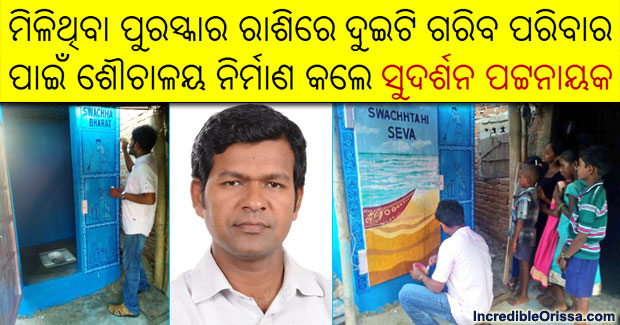